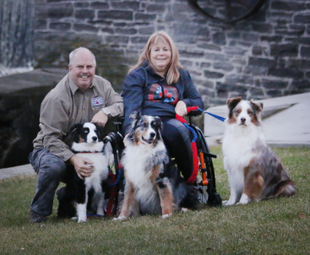 Canine Watersports Canada is owned by Karen & Mark Larocque, which officially launched in January 2016, however despite the company being just 5 years old they each have over 12 years of experience in the world of dock-jumping which is evident in their growth and success. CWC is recognized as Canada’s FIRST 100% Canadian owned and operated dock-jumping company.
Karen works diligently behind the scenes but can be seen doing various jobs during events and Mark is not only "truck driver",  but the event coordinator, and also a CWC certified judge.
Karen and Mark, own 3 Australian Shepherds (unfortunately they had to say goodbye to Bond in August 2020.  Not only was he their first Aussie but he was also CWC's first official Hall Of Famer (Bond was 15 when he passed and is the reason CWC exists).
Earl is 13 and he is officially retired, Doug turned 5 in May and he absolutely loves the sport and finished his fourth season with CWC with a Master Jump title, a Senior Grab title, a Lure title and a Toss title,  Stewie just turned 1 at the end of May and he finished his first season with a Novice Jump title.
Our Aussies' are powered by PureForm Pet Health Supplements, fuelled by Back2Raw, kept in shape by Kemptville Canine Centre and enjoy treats from Arf'Ul Good.

Lynn Campbell is known as the voice of CWC or the ‘Announcer’.
She was first introduced to this crazy, addictive sport of dock jumping in 2010, with her ‘Golden Boy’,  Jasper, and in 2018 her Australian Shepherd, Dazzle,  joined the team.
Lynn earned her ‘red shirt’ status in 2015, and has been the voice behind the mic since then.  Quote from Lynn..."(I know, right? It seems like a lot longer) I just want to be clear, I did warn Mark & Karen that that they may just be sorry that they turned the mic over to me."
When she is not on the dock or at pool side, Lynn can be found at Cricket’s Canine Country Club, where she works as an Instructor for Puppies, Rally Obedience, Agility, & of course Dock.  Lynn also co-hosts a dog camp each year called Cricket’s Camp Merrywoof,  which is an all inclusive weekend of fun & laughter for you & your dog, and truly a dog-lovers weekend! 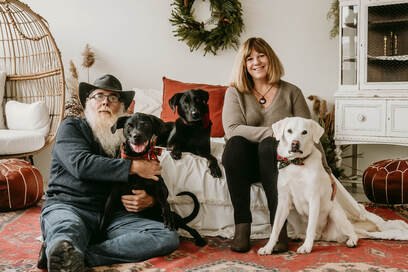 Tom and Mo Hammond have been jumping with CWC since it's beginning in 2016.  They began dock-jumping in July 2012 when they and their baby girl Myrra Bella (a Yellow Lab) got ‘bit’ by the dock diving bug and debuted at the Friendship Festival in Fort Erie Ontario. Since then, they forged some lifelong friendships and bonds with the crew that they now consider to be family. Myrra continued with CWC, earning lots of bling and two Canadian Dock Jumping Championships titles, in the Junior and Top Junior Divisions. Now retired at the age of 13, she is one of our newest CWC Hall of Famers inducted in 2020.
Myrra’s younger sister, Pearl, age 7 (a Catahoula/Lab mix rescued from Louisiana through the Canadian NOLA Organization) has been following in her footsteps. Pearl is learning and getting better each year earning titles and bling in all her own accomplishments including the 2022 Top Junior Jump Championship. She fought back from two TPLO surgeries to earn international titles and continues to improve in her diving. She competes in Lure and Jumping and are hoping that she will take to Grab as well.
Not only is Tom a certified CWC judge, but he also does whatever is needed to support the event and help the competitors. Mo can be seen, wrangling at the dockside, in the admin tent and doing whatever is needed to keep events running smoothly.

Nikki and her dog Loka live in Pembroke, a small city 150 kms northwest of Ottawa. Nikki always had a great love for dogs, and it was her dream since she was a little girl to own a Border Collie; in 2010, that dream came true when she met and adopted Loka. Having a high energy breed means having to find ways to work them in order to keep them happy, so they started practicing agility and trick training. Loka is currently titled as an Expert trick dog. Then in 2016, they were introduced to dog jumping and were instantly hooked. Loka is not a big jumper by any means, but she loves it so much, you can see it in her face when she knows it’s her turn to step onto that dock.
Nikki is a part-time photographer and runs K-IX Athletics (a subsidiary of ComBEtek multimedia) along with her friend Trevor, a videographer. K-IX Athletics takes photos at events they are able to attend, and creates promotional videos for CWC. In addition to her photographer duties, Nikki has become part of the CWC administrative team in 2018 and assists with maintenance of the CWC database and registration. When Nikki’s not on the dock, she’s probably around the pool, shooting your dog (with her camera).

​​Trevor and his dog Tilly live in Pembroke, a small city 150 kms northwest of Ottawa. Trevor and Nikki both run K-IX Athletics (a subsidiary of ComBEtek multimedia) which is a Facebook Page and YouTube channel focused on producing/sharing photos and videos of K9’s in action. After traveling to a number of dog events without a dog, Trevor decided it was time to find his own canine athlete. In 2015, Trevor adopted Tilly, an Australian Shepherd, when she was 7 months old. Tilly has become a great agility dog, but was hesitant about water, so dock jumping did not come easy. After 2 seasons of trying, Tilly finally started competing at events in 2018. She has a lot of potential and we expect to see a lot more come from her once she gets more comfortable with this sport.  Right now she is dubbed “Tigger” for her take-off style off the end of the dock.
​Trevor is a videographer by trade, he shoots and edits promotional videos for CWC. During the events, if you don’t see him on the dock, then he’s around the pool with a camera, trying not to get wet. 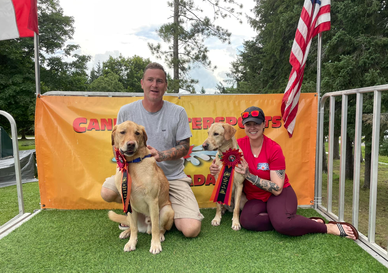 ​Blair and Grace Holierhoek live in Charleston Lake, Ontario, roughly 40 minutes northeast of Kingston, Ontario.
Blair has a combined 15 years experience in Dock Diving, and his wife Grace was brought into the sport in 2021. After Covid, Blair and Grace got back into dock diving with the CWC and have been bitten by the bug, and enjoy helping at every event.
They have two yellow labs (Rebel and Duke), a new black lab (Cali) who was a guide dog drop out, and two senior miniature dachshunds (Edward and Chuck).The dachshunds enjoy swimming off the ramp and cheering on their siblings from the sidelines. All three of their labs compete in all the divisions (toss, lure, grab and jump), and have their eyes on the Elite Canadian Championship Title.
Blair can be seen during setup, tear down and general help around the dock during events and "try-its", while Grace is doing the same and helping from an administrative perspective.